Leading up to our parish’s 70th Anniversary on March 1, 2018, we will share 70 steps our parish family has taken together.

To help set the scene and historical context of when Saint Catherine Labouré Parish was founded in 1947:
1. Pope Pius XII was head of the Catholic Church.
2. Most Reverend George L. Leech was Bishop of the Diocese of Harrisburg.
3. Harry S. Truman was the 33rd President of the United States.
4. James H. Duff was the 34th Governor of the Commonwealth of Pennsylvania.
5. Howard E. Milliken was the 28th Mayor of City of Harrisburg.
6. Catherine Labouré was canonized on July 27, 1947.
7. Permission was given on August 21, 1947 to purchase 2.897 acres of land along Derry Street and Peiffers Lane in Lawnton.

On April 28, 1948, parishioners were invited to a linen and kitchen shower to outfit the rectory. Other activities involving the entire parish included bake sales, clothing drives, booths at the Farm Show, and bingo, which still occurs today.

The 1950s were a time of expansion for the ever growing parish. A number of building and spiritual needs became priorities.
15. On May 8, 1950, Patricia Maher was received into the Foreign Mission Sisters of St. Dominica at our Lady of Mary Knoll Novitiate, being the first girl from the Parish to enter the convent.
16. On December 10, 1951 a newly organized Nursery School was established to be held during the 10:00 a.m. Mass. By September 1954, the nursery staff had seven members.
17. February 1952 saw the beginning of a “library” or collection of Catholic books available to parishioners to read and return. Parishioners were involved in building the collection through the donation of spiritual reading materials.
18. On May 7, 1952, youth of the parish were invited to an initial meeting of the Catholic Youth Organization (CYO).
19. April 19, 1953 marked the beginning of construction for the additional classrooms, which were ready for occupancy by Christmas.
20. On May 16, 1954 ground was broken for the convent. Dedication ceremonies were held on April 15, 1955.
21. September 16, 1956 marked the date of the first Parish Picnic held at the Fraternal Order of Police Picnic grounds with a donation of $3.00 per family.

During the 1960s, a number of liturgical changes were implemented with Vatican Council II allowing opportunities for the parish’s continued growth.

22. First Boys Choir was formed in early 1960.
23. On August 19, 1962, John J. Kelly was received into the Oblates of St. Francis DeSales.
24. Legion of Mary was reactivated in September 1964.
25. In the early 1960’s, a men’s bowling league, known as the Saint Catherine Holy Name Society Bowling League was established. On June 7, 1964, a women’s bowling league began.
26. Groundbreaking for the Rectory took place on November 10, 1964 with occupancy in September 1965.
27. In 1965, after the new English Liturgy became effective, Vatican Council II initiated changes mandating laymen as commentators. By June 1966, the commentators became Lectors, with the responsibility of reading the scriptures.
28. October 1967 was the first time that parishioners participated in the offertory procession by bringing gifts to the altar to be received by the celebrant.

The 1970’s were a time of endings and new beginnings for our parish.
29. Groundbreaking ceremonies for the new Shrine of the Miraculous Medal Church were held on October 6, 1974.
30. The 1975-76 school year saw the arrival of Sisters of Saints Cyril and Methodius to educate our children.
31. On April 11, 1976 (Palm Sunday), the first Mass was held in the Shrine Church. Dedication ceremonies were held on July 5, 1976.
33. In September 1975, the Office of Permanent Deacon was established. Thomas H. Flannery was ordained as a permanent Deacon on June 3, 1978.
34. In January 1977, Extraordinary Ministry was established, allowing laypersons to distribute Holy Communion.
35. On June 25 and 26, 1978, the National Pilgrim Virgin Statue of our Lady of Fatima visited the Shrine Church.
36. A new senior group called “The Coffee Cup” received its official charter on October 1, 1978.

The 1980s provided new opportunities for spiritual growth as the parish campus continued to expand.
37. August 17, 1980: the first session of the Cursillo Movement.
38. November 1984: the formation of the Nocturnal Adoration Society
39. August 1985: Hospitality or Greeters Group was established
40. In 1986, Christian Growth Groups were formed.
41. 1986-87: Parish Office Complex was constructed including sidewalks, parking areas, and outdoor lighting (1986-87) Phase 2 school expansion. (1987-88).
42. 1987-88 School expansion including plans for second floor if needed, and equipping Murray Hall with regulation size basketball court and bleachers.
43. Other activities started this decade included Meals on Wheels (1980), Garden Club (1983),
and Share the Word, Bible Study, (1986).

The 1990s ushered in many firsts for our parish, as well as a celebration of our golden anniversary.
44. In 1990, the narthex was remodeled with a small ramp leading to the restrooms for increased accessibility.
45. In the Fall of 1994, a Youth Group was started that included sixth through eighth grades from Catholic and Public Schools.
46. On April 2, 1995, the first altar girls served at Mass.
47. On June 8, 1995, Sister Carol Marie was the first woman to serve on the altar as an Extraordinary Minister of Holy Communion.
48. On May 17, 1998, the parish celebrated its 50th Anniversary with a Mass of Thanksgiving followed by a reception and banquet at the Harrisburg Sheraton.
49. Between June and November 1998, a second floor with six additional classrooms was added to the school.
50. March 29, 1999, the Parish hosted Catholics from across the Diocese for the annual Chrism Mass. 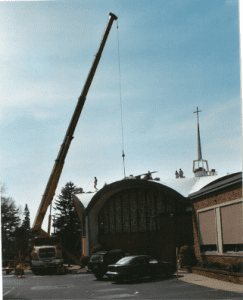 51. In November 2000, the Saint Catherine Labouré Knights of Columbus Council 12811 was chartered.
52. On December 1, 2001, and in compliance with our Holy Father’s request for the Rosary Prayer for Peace, a Cenacle of Prayer with Mary was held.
53. January 2003, Daily Eucharistic Adoration began in the Shrine Church. In July 2004, it was moved to the Chapel in the Convent.
54. During March and April of 2003, the Shrine Church roof was replaced at a cost of $50,000.
55. On June 22, 2003, eight new liturgical norms from the revised Roman Missal became effective in the Diocese of Harrisburg on Corpus Christi Sunday.
56. On August 15, 2008, our parish welcomed Most Reverend Bishop Kevin Rhoades to celebrate the Mass for the Solemnity of the Assumption.
57. During this decade, we mourned the loss of our religious leaders as they entered into Eternal Life.
August 25, 2002 Monsignor Leo A. Beierschmitt
March 5, 2004 Most Reverend Nicholas C. Datillo
April 2, 2005 Pope John Paul II
April 9, 2005 Father Curtis R. Delarm

The 2010s continues to be a decade of anniversaries, remembrances and celebrations.

58. May 31, 2011 the parish celebrated the 75th anniversary of Monsignor Topper’s Ordination into the priesthood. On July 28, 2012, the parish celebrated Monsignor’s 100th birthday with a special Mass.
59. September 11, 2011, the first special Mass for Autism Spectrum Disorder was celebrated.
60. June 2013, the parish began the concept study to refurbish the Shrine Church.
61. April 11, 2015 marked the date of the First Annual Topper Trot, a 5k race and fun run in honor of Monsignor Topper with proceeds going towards tuition assistance for SCL school students.
62. July 18, 2016, the Shrine Church turned 40 years old.
63. Summer 2017, while the Shrine Church was under refurbishment, Mass and other liturgical services were celebrated in Murray Hall, our original church.
64. September 16, 2017 a Solemn Mass of Thanksgiving and Blessing of the Shrine of the Miraculous Medal was celebrated.
March 1, 2018, Saint Catherine Labouré Parish turns 70 years old!

The 2010s continues to be a decade of anniversaries, remembrances and celebrations.

65. September 27, 2017: The Bishops of Pennsylvania gathered in Saint Patrick Cathedral to consecrated the Province of Pennsylvania to Our Lady of Fatima on the occasion of the 100th Anniversary of her appearance there. It was celebrated in the parish on October 14/15.
66. October 7, 2017: 17 parishioners made their Marian Consecration in the tradition of Saint Louis de Montfort after 33 days of prayer and preparation.
67. November 12-14, 2017: Father Matthew Larlick (parochial vicar from 2015-2017) preached the first Forty Hours Eucharistic Devotions in the newly refurbished Shrine Church.
68. November 18, 2017: Saint Catherine’s hosted the Mass for the Installation into the Ministry of Lector at which Bishop Gainer presided for over 40 candidates in formation for ordination to the Permanent Diaconate.
69. December 25, 2017: Saint Catherine’s gave all parishioners a subscription to FORMED.ORG to provide online media resources for prayer and faithful formation.
70. January 28, 2018: Saint Catherine’s launches LIFETEEN—a new Youth Ministry Program to lead our teens closer to Jesus.

And our story continues … Thanks be to God!